It’s a pity that I wasn’t able to write more consistent posts for Zannen na Otto during its run, so here’s a wrap-up post on the rest of the episodes. It was a fun and zany ride, and I don’t think it’s too much of a spoiler to say that it ended well for all concerned. It won’t go down as a classic, but for Tamaki Hiroshi fans who enjoy watching him flex his comedic chops, it’s definitely worth checking out.

Yoichi’s growth was nicely charted throughout the rest of the episodes. I thought it was done fairly realistically and in logical, reasonable steps that viewers would be able to relate to. The bulk of the episodes dealt with how Yoichi and Chisato clash over issues such as parenting methods, work vs home, friends’ problems etc. I like that although Yoichi does most of the maturing and learns to appreciate his family more, Chisato also learns to see things from her husband’s point of view.

END_OF_DOCUMENT_TOKEN_TO_BE_REPLACED

It’s always nice to see Tamaki Hiroshi with a new drama, even if it isn’t the most exciting one in the world. But I’m just happy to see him back in a leading role and he’s doing pretty well so far. Besides, Zannen na Otto is actually quite funny from the first minute, even if the subject matter might not look it.

Haruno Yoichi (Tamaki Hiroshi) seems to be the perfect husband on the surface given his looks, personality and capabilities. He has a loving wife Chisato (Kurashina Kana) and they are parents to six-month-old Hana. However recently, everything Yoichi does seems to get on Chisato’s nerves, but he doesn’t know the reason why and is therefore downgraded to being the “disappointing/unfortunate” husband… END_OF_DOCUMENT_TOKEN_TO_BE_REPLACED

Winter 2015 looks to be shaping up quite well on the J-drama front, as both Tamaki Hiroshi and Ueno Juri will be in dramas that begin airing in January. Sadly they won’t be in the same drama (yes, the dream continues), but it’s still nice that their respective shows will air in the same month. Tamaki will star in Zannen na Otto, about a seemingly perfect husband who runs into marital problems after his wife gives birth. His character, Haruno Yoichi, seems to be the ideal husband because of his looks, character and capabilities. But after his wife Chisato (Kurashina Kana) gives birth to their first child, she begins to find fault with Yoichi and the poor man doesn’t understand why, so he ends up being downgraded to a “disappointing/unfortunate” husband.

This isn’t Tamaki’s first time playing a father and husband – he was also one in the taiga Taira no Kiyomori. According to Doramaworld, Tamaki says it is a good learning experience to play such a role at this point in his life, and hopes to make his character believable so the audience can identify with Yoichi. I think he’ll do okay! He probably already ticks the right boxes for the perfect husband part, haha.  The plot doesn’t sound terribly exciting, but it’s Tamaki back in a leading role, and I’ll watch even if all he does is paint the walls! After being criminally under-utilised in Kyou wa Kaisha Yasumimasu, it’s welcome news that the new drama will mean more Tamaki every episode. I haven’t seen Kurashina Kana in anything (she’s dating Takenouchi Yutaka, if that helps!), but Otsuka Nene is also part of the cast and I’ve liked her since she starred in the original Hero, so I’m glad.

Meanwhile, Ueno will play a police detective for the first time in her career in Ouroboros. This is a live-action adaptation of the manga Ouroboros – Keisatsu o Sabaku wa Ware ni Ari by Kanzaki Yuya, about two men who witnessed the murder of their beloved teacher when they were elementary school students. They gave evidence but the case was covered up by a police officer wearing a gold watch. Fifteen years later, Ryuzaki Ikuo (Ikuta Toma) has become a detective while Danno Tatsuya (Oguri Shun) is a leading member of the yakuza. Ueno’s character is Hibino Mizuki, who works with Ikuo while at the same time suspecting his relationship with Tatsuya. Apparently, the conflicting aspects of Hibino’s character intrigued Ueno enough into accepting the role, so I’ll be interested to see her take on this. I’m more partial towards Oguri Shun now that I’m watching him in Nobunaga Concerto, looks like this will be a fairly meaty role for him.

Zannen na Otto will air its first episode at 10pm on Wednesday, Jan 14 (Tamaki’s birthday!), while Ouroboros will take the Friday 10pm slot. 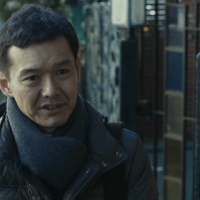